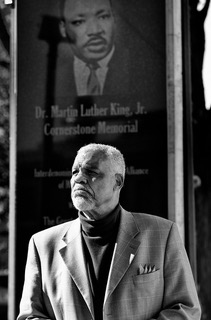 I reflect on the iconic speech of Dr. Martin Luther King Jr. in the summer of 1963, where he spoke of his famous dream. Embedded in that wonderful soliloquy are the dreams of freedom, justice and equality. All dreams have a commonality: The dreamer wakes up.

Well, I wake up in Nebraska, nearly 70 years later, searching for democracy in the state in which I was born and raised. I rub my eyes and finish my wake-up yawn and stretching, and translate King’s dream into hope that wide awake, I will find democracy in Nebraska. Democracy has its derivatives, but the core of democracy in this country is the right to vote, and the expectation of fairness throughout the voting process.

I am wide awake and I am dismayed.

I was raised in a segregated, redlined, discriminating community, overlaid by layers of racism and bigotry, in my Nebraska. We have endured lynchings, killings by law enforcement, mass incarceration, race-based health disparities, educational gaps and disinvestment and racial disrespect. I have lived, studied and written on the history in America, of centuries of voting impediments and violence, forced upon my race repeatedly.

Don’t forget the hope brought on by the 15th Amendment to the Constitution, removing race as a barrier to register to vote, and the 1965 Voting Rights Act, which again, removed race-based barriers to voting. But in spite of all of that, each of those instances were met by opposing forces of Jim Crow, hostile Supreme Court decisions, and an aggressive group of states and forces opposing true democracy, mainly because of race and privilege. While King dreamt, we need reality to set in.

Unfortunately, the reality is that Nebraska is undermining democracy.

Nebraska undermines democracy when attorneys general in 17 states, including Nebraska, supported Texas’ lawsuit that called for overturning election results favoring Joe Biden in Georgia, Pennsylvania, Wisconsin and Michigan. Two of the U.S. House members from Nebraska also supported the lawsuit. It was frivolous, an affront to all Nebraska voters and surely the voters of color in those states, and voters of color in our state.

There is no coincidence, but after the strong African American vote throughout this country for Barack Obama in 2008, the reaction from red states, including Nebraska, was to create measures to try to minimize and suppress future African American votes. What emerged was legislation to force voters to have ID to fix phantom fraud, a disguise for the suppression of people of color. Voter ID presents problems for many other classes of people. Many red states enacted those voter ID laws, and, as expected, suppression of votes is occurring. Nebraska undermines democracy when it tries over and over, year after year, failure after failure, to pass voter ID. The question is, “What’s the problem?” The answer is, it’s an assault on democracy.

Now, with redistricting again approaching, people of color in Nebraska request an independent drawing and review of the congressional district lines, to stop gerrymandering that would further water down the Black vote. African Americans, request passage of the Redistricting Act for democracy’s sake!

So, as Obama did in 2008, Biden won the single vote from Nebraska’s Congressional District 2 in the 2020 election. It is no coincidence that immediately, there were calls to eliminate that ability, and return to the unfair “winner take all” technique.

I challenge the State of Nebraska to recognize that these proposals to suppress the votes of many, and in particular, people of color, are assaults on democracy in our state. Nebraska needs an awakening.