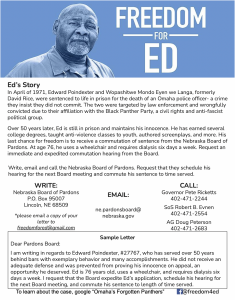 I am writing in support of Edward Poindexter #27767, who has served over 50 years in custody with exemplary behavior and many accomplishments.
I request that the Nebraska Pardons Board immediately commute Ed Poindexter's sentence to the length of time served so he may be released.

Ed is an honorably discharged Vietnam veteran, who volunteered in his community and organized for civil rights before his incarceration. I think the evidence and prosecutorial misconduct in his case makes it clear that Ed did not commit the crime for which he has been incarcerated for decades.  However, I wish to focus your attention on Ed's service to others during incarceration; his excellent prison record, including his unblemished disciplinary record for decades; and his vulnerability as an elderly person.

Throughout his long incarceration, Ed has worked to positively contribute to the arts and the well-being of youth and others. He earned a bachelor's degree and did coursework toward a master's degree, taught anti-violence classes to youth, made motivational recordings for radio, ran a juvenile detention hotline, became a member of Toastmasters, wrote screenplays, and used his creativity for music and writing to instill dignity, including authoring the book, “EsteemQuest: A Holistic Guide to Building Self-Esteem in Inmates.”

Ed Poindexter has led a commendable life by all standards. Ed was sentenced to life in prison, but not life without parole. That sentence did not exist in Nebraska in 1971.

Ed was denied a hearing for commutation by the Board of Pardons after several requests, and was never recommended for parole by the Parole Board in spite of his exemplary record in prison.  Keeping him incarcerated is an ongoing injustice.Because Ed has met the requirements to be paroled, he should be released.I know, as each of you knows, that Ed would pose no threat to society when released.It is critical that this Board show compassion for elderly people in prison.  Ed is 76 years old and uses a wheelchair.  All of his health problems and his risk of death are exacerbated by being in prison.  Ed has gone blind in one eye and currently gets dialysis six days a week. The proper, legal, medical, and humane thing for this Board to do is grant Ed Poindexter a sentence commutation and immediate release.  After 50+ years of incarceration, this elder should be released to live the rest of his life peacefully with his loved ones and supportive community outside of prison.Please immediately commute Ed Poindexter's sentence to the length of time served.  Sincerely,

[your name and address]